Renowned Swiss luxury watchmaker RAYMOND WEIL is paying homage to the holy trinity of music icons David Bowie, The Beatles and Buddy Holly with the release of three exclusive limited edition timepieces. To mark the launch of these signature pieces, Craig Leach, Brand Director of RAYMOND WEIL presented three Icons of the Irish music industry with their Hero’s watches – Louis Walsh with Buddy Holly; Ian Dempsey with David Bowie and Dave Fanning with The Beatles.

An impresario of the contemporary music scene, Louis’s roots are in the guitar rifts of Buddy Holly, globally recognised as the pioneer of Rock ‘n’Roll. RAYMOND WEIL in collaboration with his wife Maria Elena Holly, has designed the Limited Edition maestro which pays tribute to legendary musician Buddy Holly.

A lifelong fan of David Bowie, Ian Dempsey proved his devotion to him when as part of last year’s Today FM’s ‘Dare To Care’ campaign, he got a black star tattooed on his arm as a tribute to David Bowie whose last album was titled Black Star. RAYMOND WEIL presented Ian with the freelancer “David Bowie” featuring the lightning bolt that was painted across his face which first appeared on the cover of the Aladdin Sane album in 1973.

Dave Fanning, an authority on music as an Irish Rock journalist, DJ and broadcaster, attributes his love of music as being fostered by The Beatles. In his book ‘The Thing Is …’ he outlines the five month wait he endured for the band’s Sgt Pepper’s Lonely Heart Club Band album. Dave was presented with the RAYMOND WEIL Maestro ‘The Beatles “Abbey Road” Limited Edition. 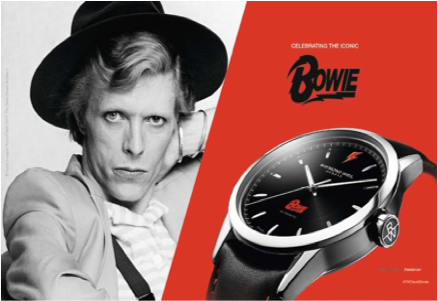 To celebrate the immortal David Bowie, RAYMOND WEIL has chosen its most free- spirited model – freelancer. Its 42 mm diameter case contains a dial resembling a vinyl record clearly featuring some of the most emblematic design cues of the British artist. Amongst the key design features, the lightning bolt painted across his face that first appeared on the cover of the Aladdin Sane album in 1973. The instantly distinctive mark universally recognised, the stylised lightning bolt is featured in red at 12 o’clock. The pop art logo designed by Andy Warhol especially for David Bowie and revealed on the cover of the album Diamond Dogs in 1974 makes its mark on the dial of the David Bowie Limited Edition.

Produced in a 3,000-piece limited, numbered series, the freelancer “David Bowie” beats to the tempo of a mechanical self-winding movement that appears beneath a portrait of David Bowie, immortalised in 1974 by famous photographer of legends, Terry O’Neill. A photograph printed on the sapphire of the watch’s case-back, from which this artist in his own league challenges the world with his atypical, magnetic gaze.

MASTERS OF MUSIC – THE MOST RENOWNED BEATLES ALBUM FEATURES ON THE MAESTRO – €1,395 RRP 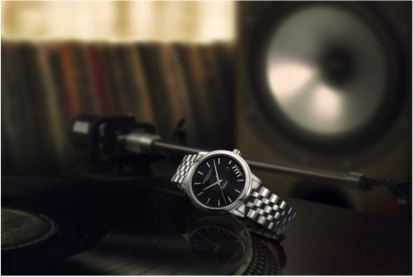 RAYMOND WEIL continues its collaboration with the world’s most famous rock band, The Beatles, by releasing a watch paying homage to Abbey Road, the last album recorded by the legendary Fab Four and regarded by some as their most influential composition. This limited numbered edition of 3,000 watches is a symbol of the timelessness of a group whose success and history are etched in our minds for eternity.

Housed in a 39.5mm steel case, the dial of the maestro ‘The Beatles “Abbey Road” Limited Edition’ is a copy of a vinyl record engraved with microgrooves. Inspired by the iconic cover depicting The Beatles on the world famous pedestrian crossing, the outlined figures of John Lennon, Paul McCartney, George Harrison and Ringo Starr stride along the groove of their landmark record.

At the heart of the dial and on the sapphire crystal case-back of the watch, the most iconic logo in the music industry beats to the tempo of the mechanical self-winding RW200 movement.

RAYMOND WEIL offers collectors and audiophiles a watchmaking classic with three hands, a date display and the timeless figures of those masters of music forever engraved in time and in the history of music.

‘THE FOUNDER OF ROCK ‘N’ ROLL 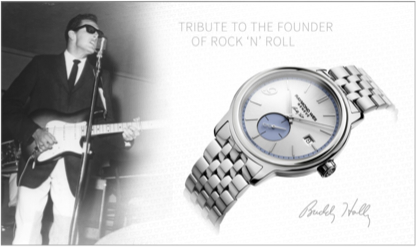 Designed in collaboration with Maria Elena Holly, the Limited Edition maestro pays tribute to legendary musician Buddy Holly, who is recognised as the pioneer of Rock ‘n’ Roll.

This truly unique Buddy Holly watch with distinctive features and references to the artist. The 39.5 mm maestro has a polished stainless steel maestro case houses an automatic mechanical movement RW4250 with a 38-hour power and polished stainless steel bracelet. The silver galvanic dial has highlights of pale blue (Buddy’s favourite colour) encircling the rim, and on the secondary second sub dial, which also wears a miniature pair of glasses (the iconic emblem of the musician) on the sweep of the second hand.

The oversized number 9, featured as a reference to Buddy’s lucky number, is balanced by the date dial at the 3 o’clock position with the emblem of Buddy Holly’s signature centered on the face of the dial. The smoked sapphire crystal exhibition case back references the tribute to the Buddy Holly Educational Foundation. A contribution from each watch sold will be donated to the Buddy Holly Educational Foundation, a charity set up to provide music education and opportunities to young people worldwide.

RAYMOND WEIL is the name of a Swiss watchmaking Maison and that of a family, which has for almost half a century been embedding its values at the very heart of its watches.

Music and art are to RAYMOND WEIL what thought is to humankind: an inexhaustible source of inspiration and creation. This enduring family-driven vision not only forges the strength of RAYMOND WEIL, but also shapes its distinctive nature. Music and art stimulate its creativity and lie at the heart of all its international partnerships with renowned artists, famous music brands, iconic concert halls, foundations dedicated to supporting the arts, as well as the most prestigious award ceremonies.