Austin Gleeson (Waterford) and Paul Geaney (Kerry) have been named the GAA/GPA Opel All-Stars Players of the Month for August in hurling and football respectively. Both players were selected by their inter-county peers following outstanding displays by their counties in the All-Ireland quarter and semi-finals.

Waterford and Kilkenny played out two titanic battles in the All-Ireland semi-finals last month and Austin Gleeson was immense in both games, scoring five points in the half-forward line in the drawn encounter and 1-1 in a thrilling replay in which the Déise fell agonisingly short to the Cats in the dying minutes of the game. 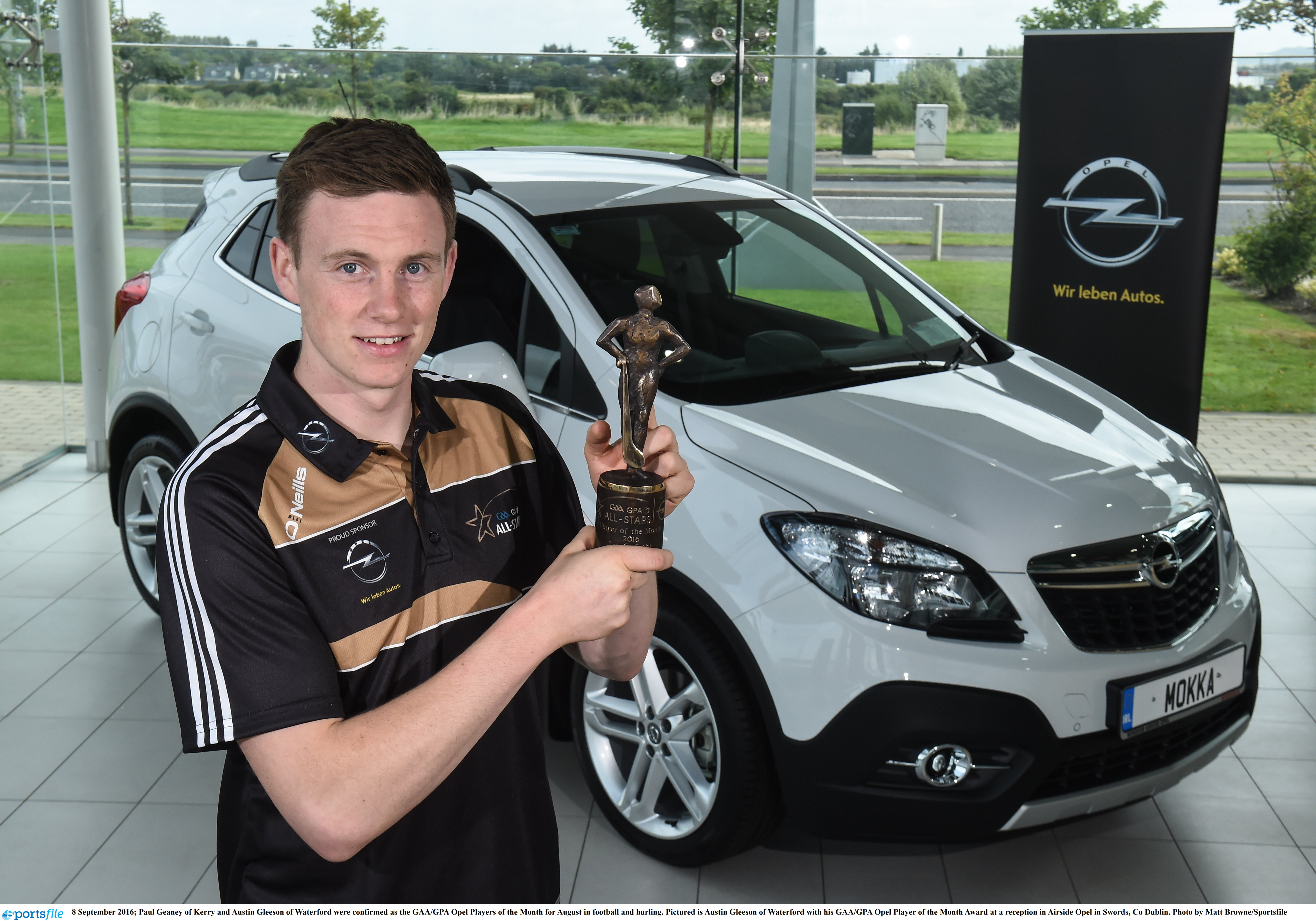 Pictured is Austin Gleeson of Waterford with his GAA/GPA Opel Player of the Month Award at a reception in Airside Opel in Swords, Co Dublin.

Paul Geaney was a leading contender for man-of-the-match in the All-Ireland semi-final loss to Dublin in what was considered one of the greatest contests between these old rivals. Scoring 1-4 in total, Geaney was Kerry’s leading attacker and the Dingle man caused huge problems for the Dublin defence, particularly in the first half when Kerry engineered a 10 point swing before half time with Geaney grabbing the second goal. 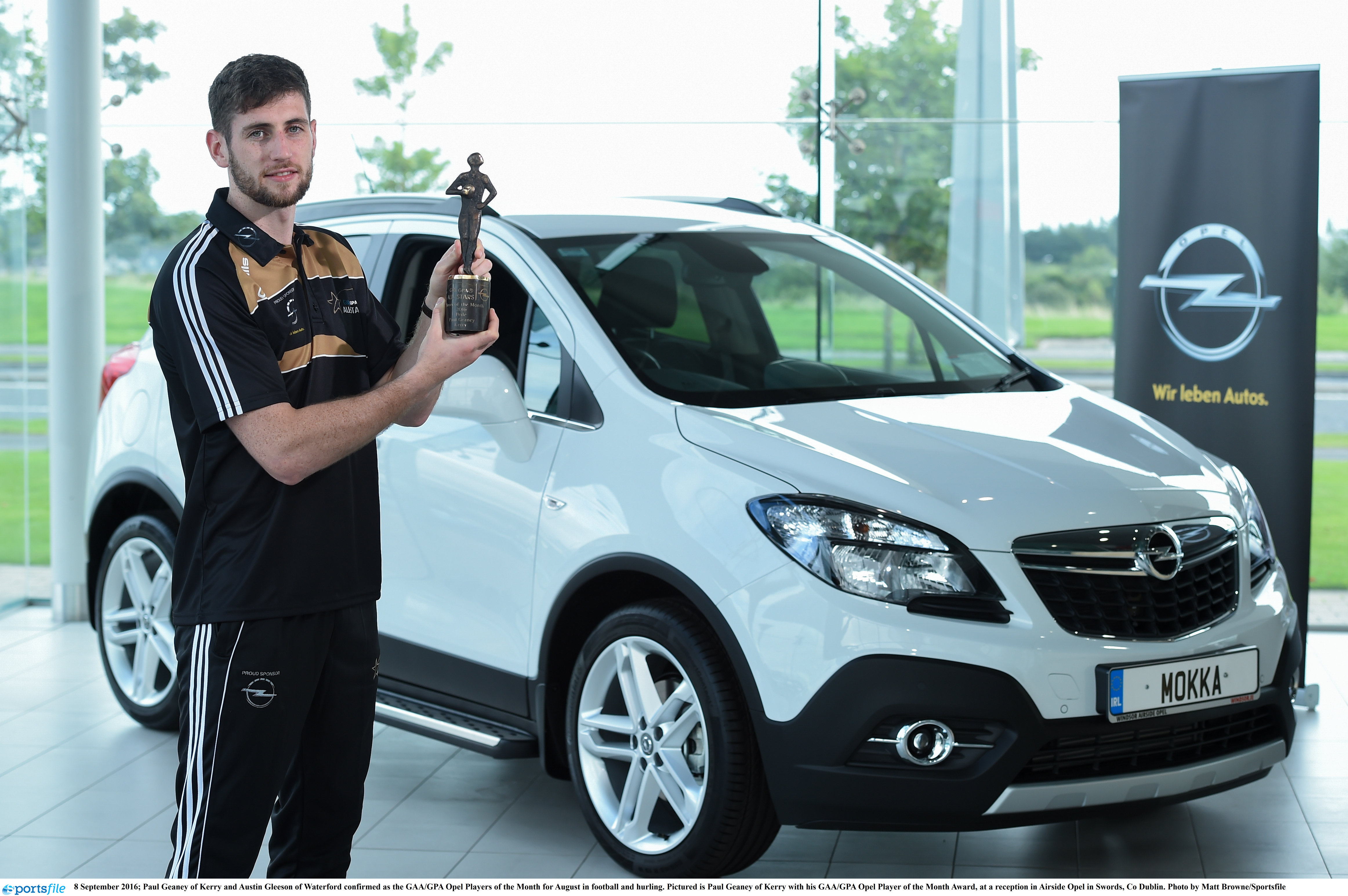 Pictured is Paul Geaney of Kerry with his GAA/GPA Opel Player of the Month Award, at a reception in Airside Opel in Swords, Co Dublin.

Commenting on the announcement, Dave Sheeran, Managing Director Opel Ireland said: “Winning an Opel GAA/ GPA Player of the Month award at the penultimate stages of a championship is a significant achievement, and a true reflection of the superb individual performances by both players. I’d like to take this opportunity to congratulate Austin and Paul, who have been singled out by their peers as the rightful winners of this month’s award, both playing pivotal roles in their countries championship campaign.”

“Austin’s exploits in not one but two games against Kilkenny were thrilling. His performance in the replay in Thurles in particular was sublime and his aerial ability is one of the joys of this superb Waterford team. Paul was a leading light in their semi-final outing against Dublin leading from the front and taking the game to Dublin in what was another modern day classic. I commend both and crucially so too do their peers. I’d also like to acknowledge the GPA and Opel for their support and co-operation in organising these awards.”

Speaking about the Award winners, Dessie Farrell, Chief Executive of the GPA added: “Congratulations to Austin and Paul on being recognised by their fellow players for their performances in the All-Ireland semi-finals last month. While Waterford and Kerry bowed out after epic battles, both players delivered outstanding individual displays and contributed greatly to games that will live long in the memory. While they’ll obviously still be hurting after coming so close to reaching the respective deciders against Kilkenny and Dublin, Austin and Paul can be very proud of their performances and, as two of the most talented players in the country, can look forward with great optimism to the seasons ahead. Many thanks to all the players who voted, to Dave Sheeran and Opel for their support and we look forward to the annual All-Star nominations next month”.

Monthly Award Winners:
Each month, between May and October, a Footballer and a Hurler are awarded for their performances in the Provincial and All-Ireland Championships. Players are short-listed by members of the All-Stars Steering Committee and the winners selected by the county playing body. Each winner receives €1,000 and a trophy.